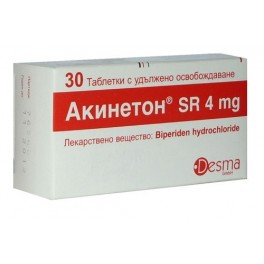 Extrapyramidal symptoms such as acute dystonia, akathisia and parkinsonian syndrome caused by neuroleptics and other drugs with similar effects.

When should be used Akineton SR?

Absolute contraindication to drug administration Akineton is the presence of untreated glaucoma, mechanical narrowing of the gastrointestinal tract, dilatation of the colon and intestinal obstruction, and in case of hypersensitivity to the active substance or any of the ingredients.

Akineton SR preparation is not suitable for use in dec: children should be given Akineton 2 mg tablets.

Akineton SR can be used only after the prescription caution in: Increase the prostate gland with urinary retention and the conditions that can lead to a dangerous increase in heart rate.

What should be observed during pregnancy and lactation?

No evidence of specific teratogenic risk to the unborn child in the use of Akineton SR. Due to lack of experience is recommended abstinence from its use during pregnancy, especially during the first three months.

Anticholinergic agents may inhibit the formation and secretion of milk. In that respect, SR Akineton missing data. The active ingredient of Akineton SR passes into breast milk and may reach concentrations similar to those in maternal plasma. Therefore, as a rule, in these cases should be stopped breastfeeding.

What should be considered in children and adults?

Experiments biperiden in children are limited and go first on the provisional application in medically induced dystonia (eg neuroleptics or metoclopramide, and analogues). Preparatyt Akineton SR is not suitable for pediatric use, children should be given Akineton 2 mg tablets.

Precautions and warnings for use

What precautions must be observed?

In rare cases, particularly in patients with prostatic enlargement, Akineton SR can cause symptoms when urinating, rarely urinary retention. Upon the occurrence of urinary retention patients should inform their doctor immediately.

In patients with increased susceptibility to seizures Akineton SR should be dosed carefully. Side effects occur especially at the beginning of therapy and at too rapid increase in dosage. Unless severe Stage complications should be avoided abrupt discontinuation of the drug. In each case, the physician should be notified. Intraocular pressure should be checked regularly by an eye doctor (compare with side effects).

The appearance of pronounced dry mouth is often improved by accepting small amounts of liquid or chewing sugar-free gum.

In rare cases, observed abuse and development of dependence on biperiden. This may be in connection with the accident occurred mood and unnatural mood.

What you need to adjust for participation in the movement and use machines?

The appearance of the central and peripheral side effects such as. fatigue, dizziness and lightheadedness, regardless of the impact on the underlying disease being treated may also change the reactive capabilities that reduce the ability to actively participate in traffic or maintenance of machines. This applies more prominently during concomitant use with other centrally acting drugs, especially alcohol antiholinergikai.

Interaction with other medicinal products

What other means Akineton affect the operation of SR, respectively. Akineton how SR can affect other resources?

Concomitant use of Akineton SR and other drugs with effects on the nervous system (psihofarmaka, allergy resources and antiparkinsonian drugs) and antispasmodics may lead to increased central and peripheral side effects. Concurrent use of quinidine (a medicine to treat cardiac arrhythmias) may lead to increased effects on the cardiovascular system.

Concurrent use of levodopa (a drug to treat Parkinson's disease) and Akineton SR may increase involuntary movements (dyskinesias).

Induced by neuroleptics (drugs used to treat mental illness) involuntary movements (tardive dyskinesia) can be strengthened by Akineton SR. Sometimes parkinsonian symptoms in tardive dyskinesia are so burdensome that anticholinergic therapy remains necessary. Anticholinergics may increase central action of pethidine (analgesic). May increase the effects of alcohol under the influence of Akineton SR.

The effect of metoclopramide (medicine to prevent nausea and other gastrointestinal disorders) and compounds with similar effects on the gastrointestinal tract, weakened by anticholinergics such as Akineton SR.

This drug should be dosed individually. The following dosages apply provided that your doctor has appointed SR Akineton otherwise. Please adhere to the instructions for use in order Akineton SR to work properly.

How much and how often you should take from Akineton SR?

Treatment with biperiden usually begins gradually. This is available akineton tablets of 2 mg. Before moving to Akineton SR, the physician should determine the appropriate dose for the individual case, depending on the desired effect and side effects. The average dose for adults is 1-3 tablets Akineton SR prolonged release 4-12 mg respectively biperiden hydrochloride. The maximum daily dose is 4 tablets Akineton SR prolonged-release with 16 mg biperiden hydrochloride. The prescribed dose should be distributed evenly throughout the day as the first prolonged-release tablet should be taken in the morning.

In cases where it is necessary rapid onset of action available Akineton injection.

How and when should you take Akineton SR?

Prolonged-release tablets are taken with some liquid (eg 1 cup of water), unchewed during or immediately after a meal.

How long to take Akineton SR?

The duration of use is determined by your doctor. It depends on the type and course of the disease and may be short-term use (eg drug induced extrapyramidal symptoms) to long-term therapy (eg Parkinson syndrome). Stopped taking this drug should be gradual.

What to do when Akineton SR was adopted in excessive doses (shi intentional unintentional overdose)?

As a result of overdose can occur more prominently in side effects. In suspected overdose should tell your doctor immediately.

As reactive substances anticholinesterase blockers are recommended, especially passing through CSF physostigmine, which affects the central symptoms (respectively physostigmine salicylate in fizostigminov positive test). If necessary, depending on the symptoms, performed cardiovascular and respiratory (ventilation with oxygen), download the temperature at high temperature and catheter.

What you need to follow when you take enough Akineton SR or miss a dose?

Next time, do not take an extra tablet extended release and continue treatment with the prescribed dose.

What should I follow when interrupt or stop treatment prematurely? Talk to your doctor, for example. if you have any side effects and changes in hospital your picture.

What side effects may occur with the use of Akineton SR?

As adverse effects on the central nervous system occur: fatigue, dizziness and lightheadedness, especially at higher doses, anxiety, states of fear and confusion, unnaturally raised mood (euphoria), sometimes impaired memory, and impaired consciousness and sensory deception (delirium and hallucinations), anxiety, headaches and insomnia. In isolated cases have been reported difficult to control movements (ataxia), muscle twitching and impaired speech. Central excitatory effects are common in patients with impaired brain function and can cause dose reduction. ^ Adverse effects on the autonomic nervous system: dry mouth, often with swelling of the salivary glands, eye disorders (accommodation disturbances), dilation of the pupil with increased sensitivity to light, sweat secretion, constipation, shortness and slow the heart rate, sometimes violations can occur during urination, especially in patients with an enlarged prostate rarely to urinary retention (countermeasures see below). May occur indoors agylna glaucoma. Therefore, you should regularly control the intraocular pressure.